“The attention to detail, the composition of the photographic space, aesthetics dear, hardness or softness of an image, form very personal reading of each of the photographers (artists / artisans) and his most personal work.”

We are faced with a solid, long-standing photographer —a true hunter of the critical moment. Jordi Pol (Barcelona, 1949) has been wandering around his hometown, looking for one-of-a-kind photographs. Thus he has documented the Barcelona of the last third of the Twentieth century. Pure photographic memory.

This exhibition displays his gaze on the various city markets—from money in La Borsa (1970) to food in La Boqueria (1969), crafts and traditions in Fira de Santa Llúcia (1969), or a second opportunity for books and culture in the Mercat de Sant Antoni (1994).

The production of these series has been personally conducted by the author, and the prints are his very own work (on Ilford Multigrade FB Glossy Warmtone photographic paper) to a size of 30x40 cm, using his Leica Ic Focomat enlarger. 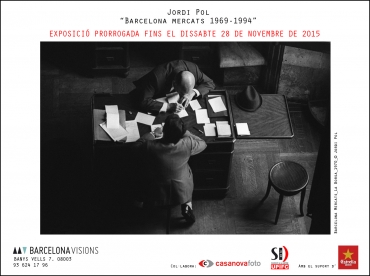